Military Challenge Coins At Their Finest

When it comes to challenge coins for the different branches of the United States Military one needs to experience Military Challenge Coins at Their Finest! This isn’t just a statement thrown out there and hope it sticks to whatever it grabs onto. It has to mean something because the challenge coin represents a military unit, its military Soldiers, Sailors, Airmen, Marines, and Coast Guardsmen. It means the US military and furthermore it means America and its military history and heritage.

In the service to the US military a coin must raise to the expectation of its military and its Veterans. It has to be detailed, convey a unique message in both written but also graphic form and it must be produced to the level of quality that the US military demands. This does not mean a cheap 2 dimension coin that some garage shop throws together (and there are plenty of them out there) but must be designed and thought through. It can’t be cheap because that sets the expectations of something that is produced with less professionalism than it deserves.

The coin design an craftsmanship of Vision-Strike-Coins and Vision-Strike-Wear.Com surpasses the fly-by-night garage operation that really must go. It sets the bar at a level attainable for those with the commitment of designing and producing only the finest in military challenge coins.

Some military coins can and do make a difference when it comes to heritage, history, a way of life for so many for so many years and preserving that memory in a challenge coin shadowbox or part of a military coin collections is often what people do.

The United States Marine Corps and its US Marines are riflemen first and second they are trained in a variety of roles and hold job titles that are accompanied with MOSs (Military Occupation Specialties). Many of these USMC MOSs have been developed into coins by Vision-Strike-Wear.Com like this USMC 0313 LAV Crewman Marine Corps MOS Coin. This USMC MOS coin is 2 inches, comes complete with silver and gold metallic accents, laser engraved for authenticity, cut to a 3d relief, designed with a number of the weapons associated with a Marine LAV. 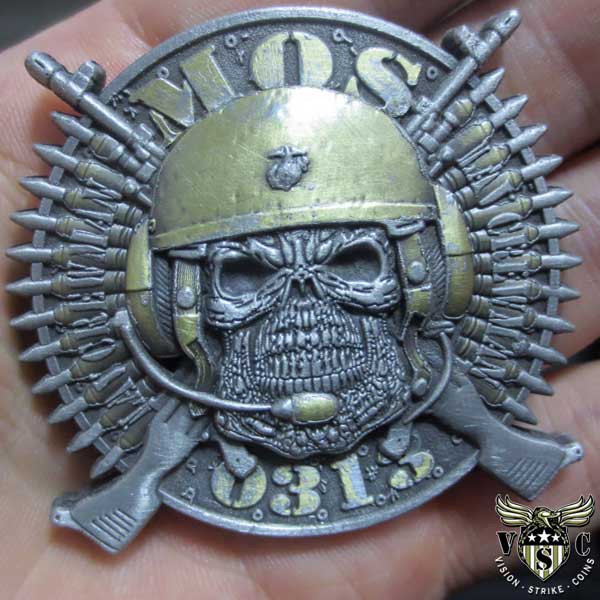 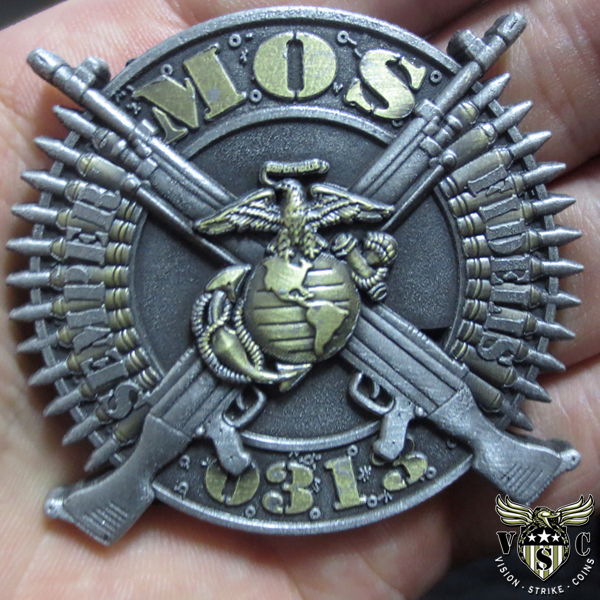 The USMC packs heavy armor too in the form of M1A1 Abrams. In fact 3 active duty USMC Battalions and 1 Reserve USMC Tank Battalions round out the very capable punch and power of armor. This USMC 1812 Tank Crewman Marine Corps MOS Coin was specifically designed for those US Marines that work as a close team inside these main battle tanks known as the Abrams. 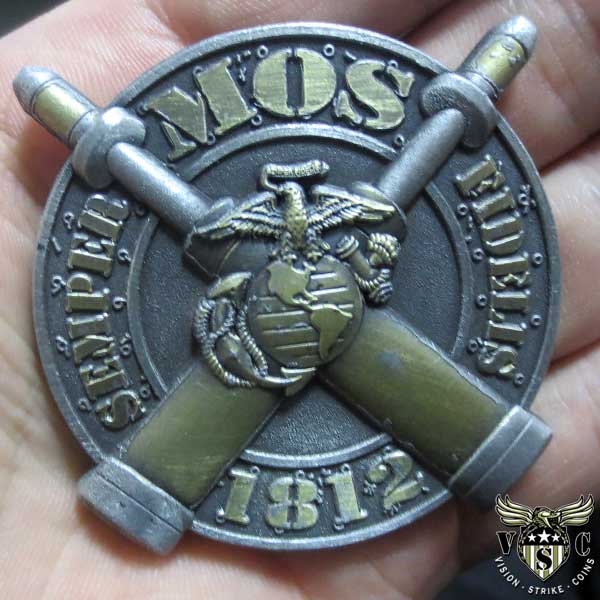 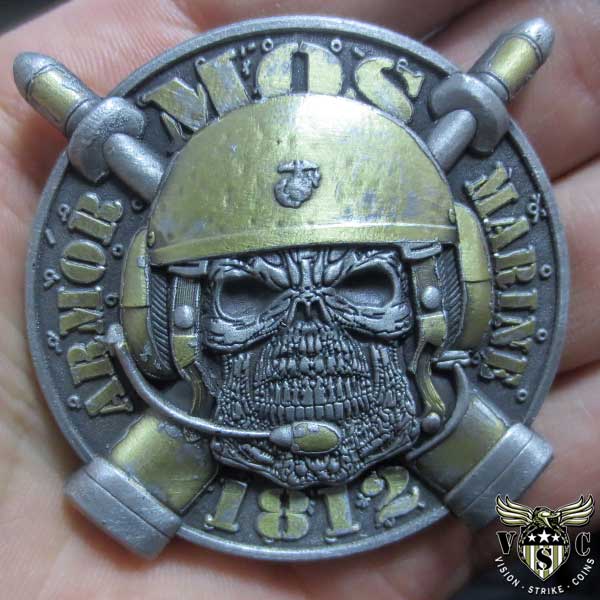 This Army 75th Ranger coin “Leads The Way” is one example of the type of coin that Army Rangers collect and hold onto for years to come often beyond their years while in service. Asked to produce this Army Ranger coin it was both an honor and a pleasure to do so. 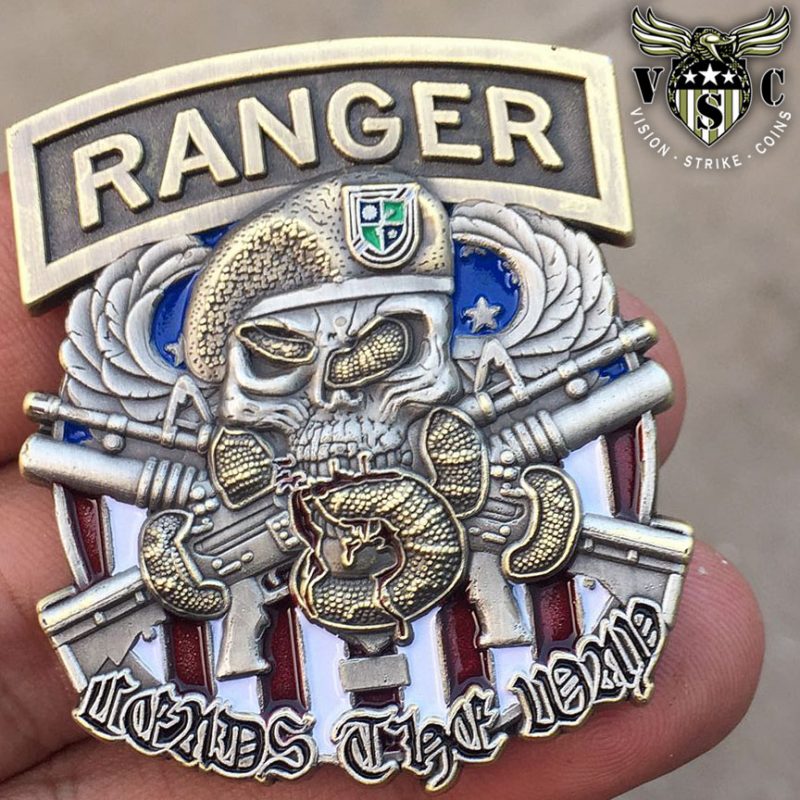 A SERE coin for those that went through this hellish course and lived to never talk about it. A purple unit designed to give our men and women of the military a fighting chance should they be caught while fighting the enemy. One side with blindfold representing the captured soldier and the reverse with blindfold removed representing the escape and the culmination of what SERE training represents.

Side A represents the captured state of the SERE trainee while Side B (displayed below) illustrates the one eye open and escape which is at the heart of SERE training. 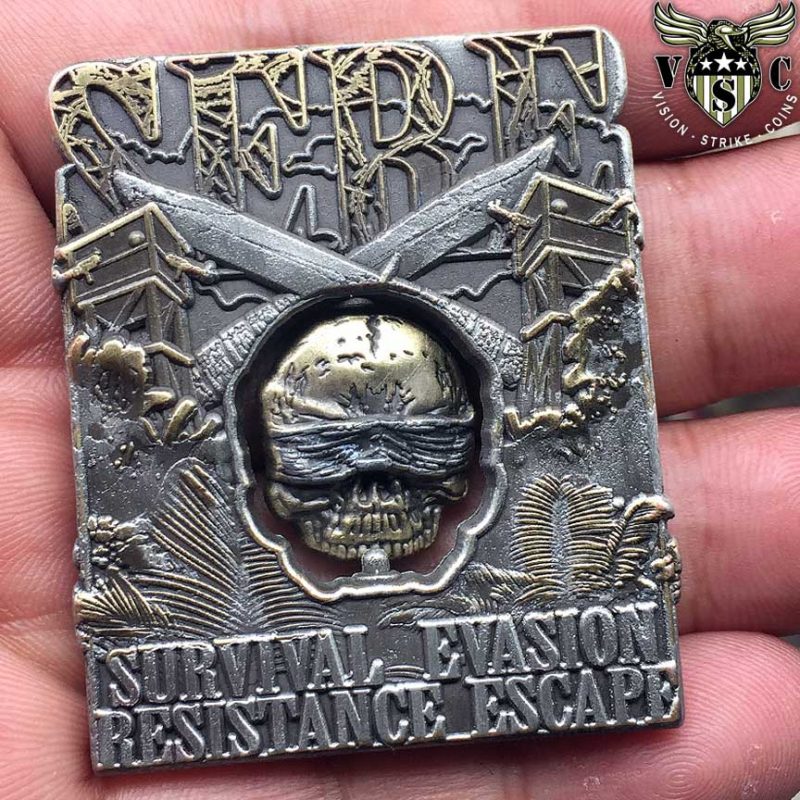 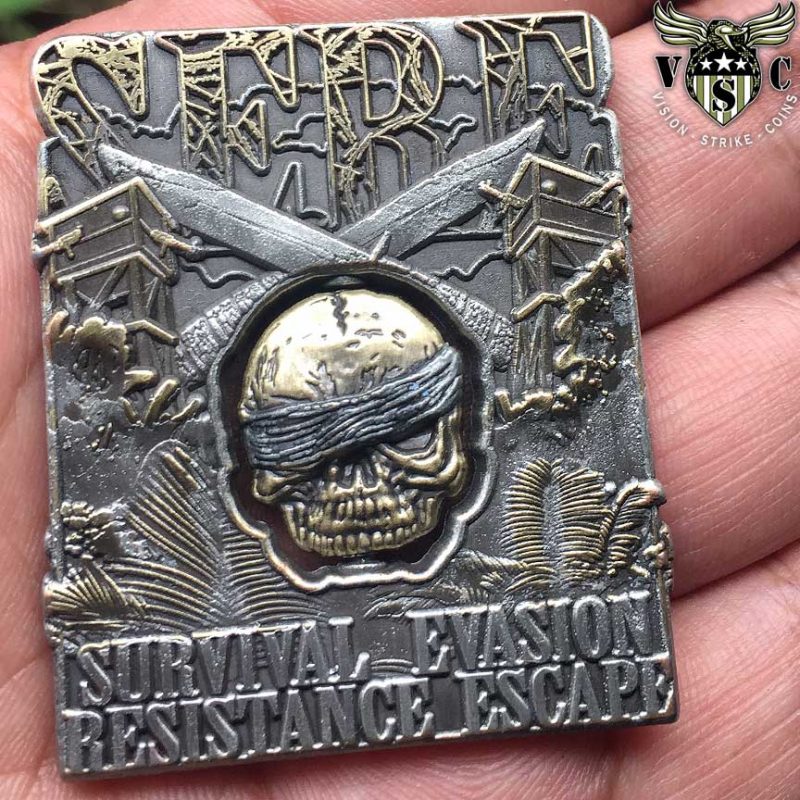 Some of the newest coins to hit the line have arrived at Vision-Strike-Wear.Com beginning with the recent introduction of the Naval Intelligence coin with motto IN God We Trust All Others We Monitor a long standing tradition within the naval intel community.

Each of these tough and highly detailed US Army Armored Division coins features the intense look of a tanker with helmet, boom stick, rounds of ammo, crossed tank shells and the infamous Death Before Dismount associated with US Army armor.

Why not a military bottle opener?

When the US navy inquired with Vision-Strike-wear.Com they did so because they knew they wanted the kind of detail and craftsmanship that VSW delivers. The US Navy Jolly Roger bottle opener was a perfect example of the detailed work that VSW puts into each of its bottle openers and military challenge coins.

A perfect example of the kind of quality in both design and craftsmanship when it comes to a US Navy Rate coin is this Information Systems Technician Coin built for the IS Rate and those USN Sailors that are proud to hold this rate.

USMC Drill Instructor coin? You bet. MOS 8511 Salty Edition. At the request of the saltier US Marine Drill Instructors it ws an honor to produce this USMC challenge coin in such a way that the the MOS 8511 was displayed as it should be along with the EGA smokey the bear, skull and teeth bared. This highly decorative and detailed coin was produced with the most attention to detail and professionalism and it was an honor for us to produce them.

2017 marks the anniversary of military working dogs. These dogs have gone to war since 1941 in virtually every branch of the US Military. Some have made it home while many have not leaving heir partners just as grieved as any soldier lost in combat. For those that have been reunited it is one of the happiest moments of both of their lives as old soldiers see each other again having been separated by great distances.  This is a coin personally created for them and out of respect for the, The K- teams of the US military are honored with this K-9 75th Anniversary Magnum Coin!

Semper Paratus! The US Coast Guard has an awesome responsibility patrolling, guarding and enforcing the oceans off the US Coast line, its waterways and its harbors. The USCG has a long and very proud tradition and it is in this vein that we created this USCG Never Retired Semper Paratus coin for them.