Custom US Navy Military Shirts Seen Across The Globe

Custom US Navy Military Shirts Cross The Globe At Vision-Strike-Wear.Com At Vision-Strike-Wear.Com and its an every day thing. The custom military United States Navy shirts originally designed and printed at Vision-Strike-Wear have gone from Pearl Harbor to Norfolk Naval Shipyard, ATG Mayport and Jacksonville to Groton, Connecticut, New York Nuclear Training facilities to Subic Bay, Sasebo and Atsugi, Japan have travelled the world on US Navy destroyers, cruisers, submarines, aircraft carriers, amphibs, small boys and big boys alike and have graced the backs of US Navy Sailors from Seaman to Master Chiefs. Annapolis to Great Lakes and every major A School in the US Navy has enjoyed the morale building naval tees created by VSW and it has been an amazing journey for all.

US Navy Shellback designs, VBSS Teams, JEA, SCPOA, FCPOA and CPOAs, aka the Goat Lockers where the backbone of the United States Navy resides, The Chiefs, have had custom US Navy shirts created for them by Vision-Strike-Wear.Com with each new design bringing originality, flair, morale, creativity and overall kick ass unique US Navy designs to be enjoyed by US Navy Sailors the world over. If you are interested in having a design created please contact us at Custom US Navy shirts.

A custom US Navy shirt design created for the CPO 365 program at the USN Hospital located in Rota Spain.

Then came the phone call from Naval Submarine Base New London and the Sailors of the United States Navy. Give us a submarine, Kraken with dixie cup and strong tentacles hugging the submarine, make it black and white and make it cool. We responded!

Something Wicked This Way Comes! An opportunity to produce a wonderful design for VAQ-134!

A custom Navy shirt designed for VX-20 The Backbone of the US Navy!

There are some incredible US Squadrons like VQ-4 The Shadows. The Shadows borrowed from the 20 and 30s along with their E-6B aircraft and a whole lot of detail and color thrown in made this a wonderful custom US Navy shirt to create for them.

The USS Topeka SSN-754 called VSW and asked for a design that had their amazing warship, the Capitol of Kansas, Topeka and its state building, US Navy Officer’s Crest, Enlisted Rates, and Motto “Defenders Of The Heartland” created for their ship.

The Second Class Petty Officers Association aboard the USS Fort McHenry requested and amphibious design featuring an alligator, anchors, Eagle and chevrons and got it with the kind of detail found at Vision-Strike-Wear.Com!

When a Boomer calls we listen! The USS Tennessee SSBN-734 and its FCPOA did call and wanted a stunning design for their First Class Petty Officer Association and we listened!

The US Navy SEABEES! Amazing. this design created for a Seabees unit and Charlie Co was taken from the VSW Jolly Roger Navy design and updated with text and additional detail!

The First Class Petty Officer is an accomplished leader. Just below the rank of Navy Chief, the first classes prepare for their time as future senior leaders. The relationship between first class and chief is an interesting one. Driven hard by the Chiefs the First Class is looked at as the rising leaders and must be scrutinized to ensure they pass into the higher ranks ready to get the job done. The FCPOA is one place where their skills are tested and prepared whether in a CPO 365 environment or through communication and information exchange with other firsts. This US Navy VR-56 Globemasters FCPOA Shirt with male and female E-6 enlisted hold the world up in uniformity and equality as they show others they Have Got This!

A satellite phone call from NMC Sigonella made this shirt design for this command a reality. Skulls, crossed cannons, anchor, American and Italian crossed flags and more detail than you can shake a stick at became a reality for this United States Navy command.

Sometimes we gt to design for US Navy squadrons like VR-62 The Nomads!

The USS Princeton CG-59 an Aegis missile cruiser with the sleek and fine look of a Ticonderoga cruiser. A design with Jolly Roger, knife in mouth, crossed bones, porthole, rough waters in the background, anchors, tridents and the slogan “Honor And Glory!” A wonderful black and white custom US Navy shirt design for an  amazing warship and its crew.

The warships of the US navy frequently contact VSW with details and information about how they want their crew shirts to look. Within the crew there are divisions like the Engineering Division on board the USS Ramage. They wanted a razor sharp design for their department and that is what they got!

Of course Second Class Petty Officer’s Associations of the United States Navy order shirts. As future senior leads in the US Navy these associations (SCPOA) are critical to the development of training and skills preparing these future leaders for this role. On occasion they also request some of the coolest military shirts around. So when the SCPOA at FRCMA Oceana gave us a call about their shirts we were overjoyed! Backbone of the Navy!

Coastal Riverine Group 2 wanted a shirt designed for their CPO Mess and they got it. Featuring the US Navy Goat with crossed arms, cover, anchors, fast boats barbed wire and the various commands this important USN Command is associated with all came together for their mess. The moment they ordered their shirts they came back for a second round almost immediately. Semper Fortis!

The US Navy operates at the top of the world and at the lowest geographically but when it comes to the last mile marker and the most southern part of Florida and the US there is a detachment that handles high explosives and is part of the US Navy IYAOYAS community. NC Detachment Key West is that unit and command and they wanted something special when it came to their US Navy shirts.

Patrol Squadron 1 of the United States Navy requested a Jolly Roger design featuring the USN Rate symbol for Aviation Ordnancemen and the all too famous wording, IYAOYAS.  black and white design with tremendous detail and character which when printed on a black or dark colored shirt really stands out and pops.

The USS McCampbell CPO Mess requested a custom US Navy shirt featuring their ship US  Flag and Japanese flag showing the support and relationship each country has to one another. The ship’s Motto “Relentless In Battle” along with each of the US Navy Chief’s anchors were also designed.

At the request of the Chief Of The Boat comes this USN shirt design for the USS Columbia. Warrior SSN-771!

The USS Winston Churchill the only US Navy ship named for a foreign dignitary. The Chief’s Mess wanted a design with a Goat and Greek like look displaying shield, goat, spears and helmet and that is what they got. They reordered almost immediately! “We Steer The Course”

Don;t Worry We Got This a common saying among enlisted First Classy Petty Officers when responding to a US Navy Chief. The definite working class among the ranks. Experienced leadership. Hard working and still working to make it among the senior enlisted. The FCPOA’s of the US Navy are developing skills, teaching each other and gaining valuable information. This design created for NAS Fallon FCPOA is one example of the custom US Navy shirts created for the FCPOAs of the US Navy.

A US Navy Gator in a pea coat? We actually did get that request and to top it off we added a Dixie Cup.

When the USS Connecticut called and requested a custom US Navy shirt we answered. The request was taking our Navy Squid with tentacles, dixie cup and pea coat and adding their motto “Arsenal Of A Nation” to the bottom text before printed them on highly durable moisture wicking shirts for the Chief Petty Officers aboard this grand warship.

Associations and non-profits also have received a number of wonderful custom shirts and military designs over the years from Vision-Strike-Wear.Com. One such organization, the Tin Can Sailor Association, requested of course a squid ripping open a can of Whoop Ass, with full color and nautical elements. The title “Strength From The Seas” was added and finished this wonderful Tin Can Sailor shirt design.

VP-10 Navy Patrol Squadron. We Got This. Orions and tactical control screens were the central theme for this US Navy Squadron which we were proud to work on.

Below please find VSW designs that have been originally designed specifically for the commands, ships, squadrons and men and women of the United States Navy. It is an honor to serve you. 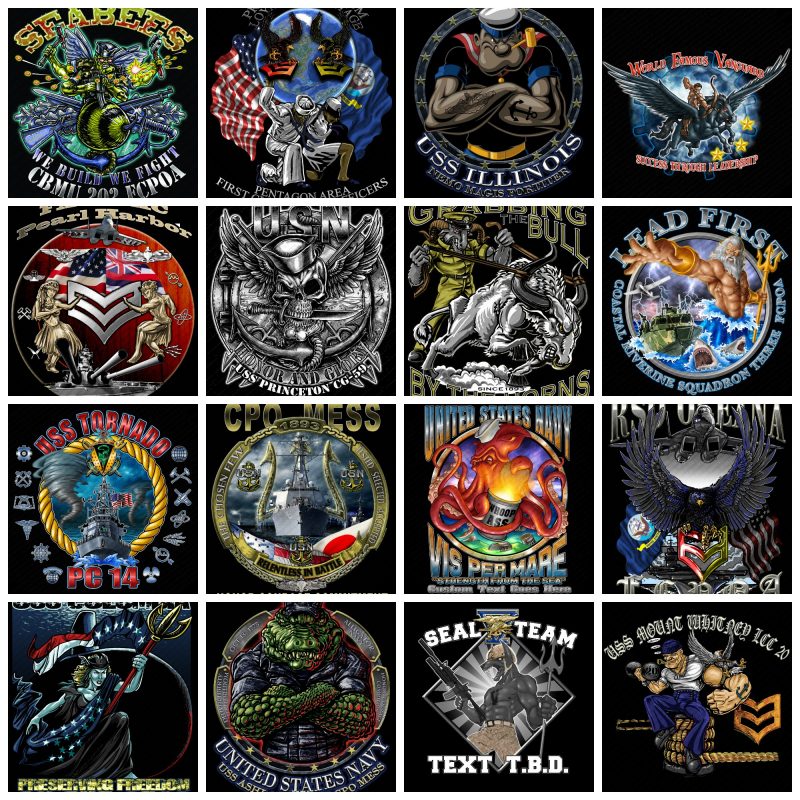 A design created for Coastal Riverine Squadron 3 FCPOA of the United States Navy. They wanted a highly detailed and very colorful look for their First Class Petty Officer shirts. 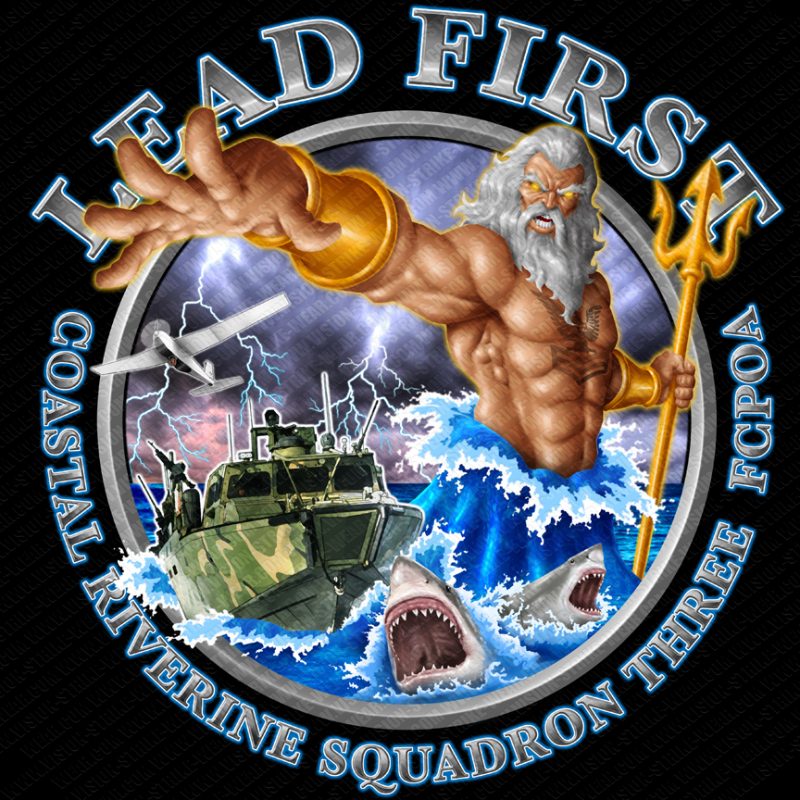 The USS Wayne E Meyer needed a shirt 90 days out from their return to home and something with a twist aimed at their galley and they got it. Straight Out Of The Scullery. DDG-108 custom shirts designs for the US Navy and its sailorsl

The USS Harpers Ferry LSD-49 FCPOA Shirt created with gators and bulldogs symbolizing the toughness and relationship between the US Navy and the US Marine Corps.

MALS-24! Marine Aviation Logistics Squadron 24 (MALS-24) is an aviation logistics support unit of the United States Marine Corps. Known as the “Warriors”, they fall under the command of Marine Aircraft Group 24 (MAG-24) and the 1st Marine Aircraft Wing (1st MAW) and are currently based at Marine Corps Base Hawaii. (Source – Wikipedia) Here is the shirt custom US Navy shirt design requested by the US Navy Chiefs in the MALS-24 Mess.